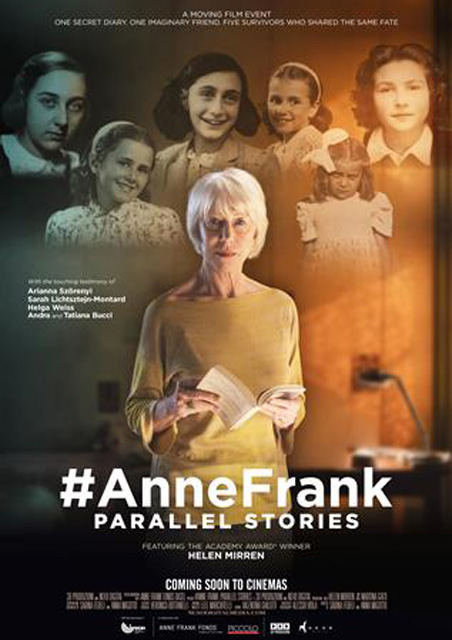 Annes story is intertwined with that of five Holocaust survivors, teenage girls just like her, with the same ideals, the same desire to live, the same courage: Arianna Szörenyi, Sarah Montard, Helga Weiss and sisters Andra and Tatiana Bucci.
Helen Mirren will introduce audiences to Annes story through the words in her diary. The set will be her room in the secret refuge in Amsterdam, reconstructed in every detail.
Off "the set", a young girl, will lead us on a journey to get to know the places that were part of Anne Franks short life and her feelings. She wants to know about the story of the Jewish teenager who became a symbol of the greatest tragedy of the 20th Century, and she also speaks to us through social networks. In fact, photos and posts are her language, and in this way she gives us her interpretation of what she discovers, sees, from the Bergen-Belsen concentration camp in Germany (where Anne and her sister Margot died) to the Holocaust Memorial in Paris, up to and including her visit to the secret refuge in Amsterdam. In the documentary we also hear the voices of Rabbi Michael Berenbaum, historian and professor of Jewish studies at various American universities, Holocaust historian Marcello Pezzetti, director of the Holocaust Museum in Rome, French ethno-psychologist Nathalie Zajde, witnesses Doris Grozdanovicova and Fanny Auchbaum, world-renowned violinist Francesca Dego, Yves Kugelmann publisher and member of the Anne Frank Fonds Basel, Ronald Leopold  director of the Anne Frank House, Alain Granat director of online magazine Jewpopo, and photographer Simon Daval.

No times have been scheduled in for #AnneFrank. Parallel Stories. Please check back later.