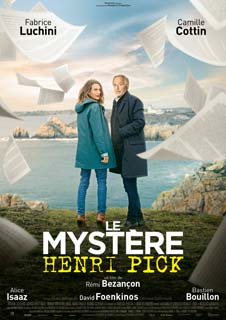 The Mystery of Henri Pick

In a strange library in the heart of Brittany, a young publisher discovers an extraordinary manuscript that she immediately decides to publish. The novel becomes a bestseller. But its author, Henri Pick, a Breton pizza-maker who died two years earlier, would never have written anything other than his shopping lists, according to his widow. Persuaded that it is a sham, a famous literary critic decides to lead the investigation, with the unexpected help of the daughter of the enigmatic Henri Pick.

No times have been scheduled in for The Mystery of Henri Pick. Please check back later.